The Danube guest in Argentina: viadonau represents waterway expertise made in Austria at Smart Rivers 2015

See you in Buenos Aires! For the first time, the biennial Smart Rivers Conference was stationed in South America and for four days the Argentine capital became the center of the world for modern waterway management. Together with the representatives of the Austrian delegation, viadonau brought expertise, experience and current developments from the Danube region to the Atlantic coast for the 7th edition of Smart Rivers. 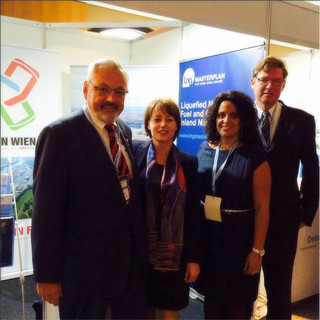 Smart Rivers is setting out for new shores. The city on the Rio de la Plata with its 2.9 million inhabitants offered in the district of Puerto Madero between 7 and 11 September a picturesque backdrop for 370 international experts who met to discuss the latest trends in waterway management and cargo transport- an ideal opportunity for a global networking of expertise and latest development in a rapidly developing region. Professionals and experts from 25 countries were invited by the organizers, the Argentine section of PIANC, to hold some 90 presentations on a broad spectrum of themes ranging from River Information Services to navigation technologies, inland waterway transport and the environment, infrastructure maintenance, ports or international and transnational cooperation in the field of inland navigation and the integration of the waterway in multimodal transport chains.

viadonau experts provided interesting insights on the areas of Communication and Stakeholder-Management, Renaturation and fairway maintenance as well as on the implementation and enhancement of River Information Services in Austria and Europe. This premiere event for Smart Rivers in Latin America was held in a positive atmosphere with a world-wide attendance discussing the future of a promising market - the active and responsible, efficient and modern waterborne transport sector.
"Smart Rivers in Buenos Aires was an opportunity for viadonau to exchange views on an international level and for the first time in Latin America", summarizes viadonau Managing Director Hans-Peter Hasenbichler.

A view also shared by Geoffrey Caude, PIANC President and Representative of the French Ministry of the Environment. "Smart Rivers halted for the first time in Latin America - a milestone thanks to which we opened our doors to newcomers", said Caude.

The Austrian delegation, comprising of representatives of viadonau, Port of Vienna, Pro Danube Austria, A3PS and Pro Danube International, also had the opportunity - upon invitation by the Austrian Ambassador to Argentina,  Karin Proidl, to meet former Austrian Chancelor Viktor Klima and discuss with him the national and international development of the inland waterway as siginificant mode of transportation.

SMART Rivers Conferences
Held for the first time in 2005 in Pittsburgh (USA), SMART Rivers is a biennal Conference which every two years brings together professionals and experts involved in river transport around the world. Since 2011, SMART Rivers is under the patronage of PIANC.

PIANC
PIANC is an umbrella organization which joins together 65 countries and about 450 companies, organizations and institutions as well as 2000 individual members worldwide. Founded in 1885, it is the oldest international organization for technical and scientific issues in inland navigation.