Bioengineering was used to protect the river bank, the Hollitzer alley and the underlying waste water pipes. A near-natural alternative to the hard stone structures is used. The chosen construction is used for the first time in this form at the Danube. 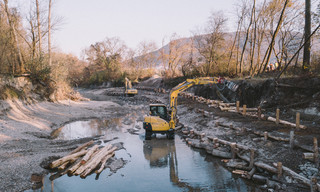 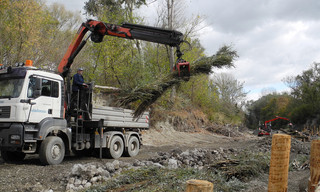 The ‘Johler Arm’ has developed itself well since the reconnection to the Danube in 2013. The river develops natural river banks and is (under normal circumstances) flown through by water almost all year long and offers fish a possibility for retreat and spawning. With some luck it is even possible to see kingfishers.

At the turn of the year 2017/18, a strong bank erosion at the inflow opening occurred in direction of the Hollitzer alley. While an old, mostly invisible bank protection is securing the Hollitzer alley from erosion by the side arm, a similar type of protection is missing at the inflow opening on the first 250 meters. This gap is now closed with a for the Danube new kind of construction.

When talking about soil bioengineering measures for river bank protection, it means that plant materials are playing a vital role and that the stabilizing and protecting effects of plants and their roots is used.

At the inflow opening of the Johler Arm, resistant larch and black locust trunks were used as a frame for the terrace shaped construction. Willow fascines – bundles made out of living willow branches – were then incorporated. Finally, the bank protection was covered with Danube gravel. Some of the willows from the fascines will sprout in spring and further strengthen and slowly green the river bank. Additionally, willow cuttings will be planted as well.

The soil bioengineering measure was implemented within the context of the Catalogue of Measures for the Danube to the East of Vienna. The implementation took about a month and was mainly done by the local maintenance team of viadonau. The production of the fascines was done by viadonau who were actively supported by members of the University of Natural Resources and Life Sciences of Vienna, of the Nationalpark Donau-Auen and of the WWF. In this way the project was also a way of sharing experience about bioengineering measures.