More water for the Danube floodplains: River reconnection within the frame of Dynamic Life Lines Danube

The approximately 4-kilometer-long ‘Spittelauer’ side arm was cut off from the Danube during the “Great Danube Regulation” in the 19th Century. Since then, lots of valuable habitats got lost due to the area slowly silting up, leaving the Danube unable to remodel the river landscape by its own force. Within the framework of the “Dynamic LIFE Lines Danube” project, viadonau is reconnecting the side arm system opposite the city Hainburg to the Danube, creating a new habitat. 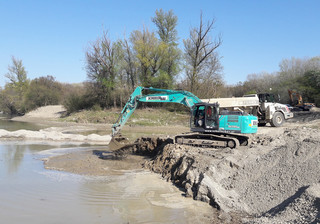 In the course of the current project, the tributaries will be connected to the Danube and the water will be able to flow through almost all year long. Especially the juvenile stages of the dynamic alluvial landscape and fish population are expected to benefit from the measure. Additionally, an island is created by the reconnection, which then acts as a refuge for the animals of the floodplains.

In celebration of the start of the constructions, state secretary Magnus Brunner emphasizes the integrative approach. “The Danube is both the transport corridor and lifeline and therefore improvements for shipping and ecology go hand in hand. By reconnecting the Spittelauer side arm a vital milestone for the improvement of the habitat has been implemented and on top of that, the renaturation measures give the river more space and have positive effects on flood protection.”

Particularly flood protection profits from this project twice, since the restoration of the Marchfeld flood protection dam which is running at the same time, creates direct synergies by reusing the armor stones. Part of the recovered amour stones can be incorporated in the only 10 km far away dam next to Stopfenreuth. Besides the immediate costs which can be saved for disposal and acquisition, also pollutant emissions can be kept low due to the short transportation routes.

"Multiple renaturation measures were already implemented at some waterbodies in Lower Austria with the help of the LIFE funding program of the EU. The fact that the successful work can now be done within the frame of such a big project, shows the importance of natural protection areas in Lower Austria for the protection of endangered species in Europe”, says Deputy Governor of Lower Austria Stefan Pernkopf.

The important side arm systems at the north bank opposite of Hainburg as well as between Haslau and Regelsbrunn at the south bank will become valuable habitats in the future. According to Edith Klauser – director of the Donau-Auen National Park who welcomes the important revitalization measures: “The LIFE Project will reconnect about 14 km of side arms to the Danube in the national park alone. Further a renaturation of about 4 kilometer of river banks is planned. These measures will give the Danube more strength to remodel the landscape, from which many typical species of the floodplains, such as the endangered pigo or the streber as well as the sea eagle - who successfully hatches in the surroundings of the Spittelauer side arm - will benefit.”

The construction measures are of course carried out with the utmost consideration for the protected goods of the national park. A flexible concept was developed in order to protect the nesting sea eagles and supervised by the employees of the national park.
Also in order to protect the employees from getting infected with COVID-19, construction works were paused for a short time. But after a safety concept and corresponding training had been completed, the construction work was possible to be continued in compliance with the strict health requirements.

The actual start of construction was preceded by a successful application for funding in the LIFE Nature funding program of the European Union. In the previous year, the Austrian-Slovakian consortium under the leadership of the Austrian waterway company viadonau got awarded with the contract for the “Dynamic LIFE Lines Danube” project. 25-kilometer-long lifelines shall come into existence in the Danube floodplains during this project as well as direct measures for improving the alluvial forests will be carried out. The Donau-Auen National Park, WWF Austria, the Slovakian NGO BROZ, the Comenius university in Bratislava (Faculty for natural sciences) and the national forestry center of Slovakia (NCL) are involved. The county of Lower Austria and the Lower Austrian fishery association are financially supporting the project.

“viadonau plays a pioneering role when it comes to renaturing large navigable rivers. The experience from this has influenced the measures which were taken during the preparations and will be forwarded to the experts for ecology and river engineering in the Danube region in this LIFE project”, concludes viadonau managing director Hans-Peter Hasenbichler.