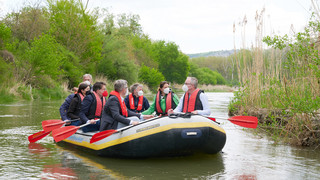 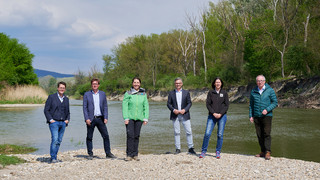 A bright river ecological signal on a significant anniversary. Dynamic LIFE Lines Danube stands for the preservation and ecological improvement of the Danube floodplains in eastern Austria and western Slovakia. As part of the multi-year project, the renaturation of the Spittelauer side arm in the Stopfenreuther floodplains has now been completed and a Danube tributary that flows almost year-round has been restored - a new development space for nature that also offers people unique experiences of nature, as State Secretary Magnus Brunner also noted on site. For Brunner, the completion is a particularly beautiful and fitting occasion to celebrate the 25th anniversary of the Donau-Auen National Park in a dignified manner. The success impressively demonstrates the importance of the joint protection of habitats, which are also particularly valuable for people as recreational areas and leisure spaces, he said. Emphasizing the unique added value of river habitats for both people and nature is also important to Lower Austria's Deputy Governor Stephan Pernkopf. He is particularly proud of Lower Austria's long tradition of involvement in a wide range of renaturation projects and ecological measures to protect biodiversity over the past 25 years. Vienna's Climate Councillor Jürgen Czernohorszky also looks back on the past quarter century with pride. In good cooperation with the province of Lower Austria and the federal government, the City of Vienna has ensured the preservation of precious floodplain landscapes between Vienna and Bratislava. The successful renaturation of the Spittelauer side arm is of great importance for the preservation of the Danube floodplains and a model for the future of river ecology east of Vienna.

The future of the Danube east of Vienna seems to be marked out. Thus, the milestones jointly achieved with the Donau-Auen National Park describe a clear development course for viadonau along the Danube. The name of the Dynamic LIFE Lines Danube project says it all: for viadonau Managing Director Hans-Peter Hasenbichler, restoring the tributaries as lifelines for the surrounding area is a central approach to re-establishing varied microhabitats for a variety of plant and animal species. In this way, the Spittelauer tributary, which once again has a year-round flow, acts as a true multiplier for biodiversity. For example, for animals such as the nose, barbel, little ringed plover and kingfisher, as National Park Director Edith Klauser explains. With the changing water levels and near-natural conditions, the young stages of an alluvial landscape in particular would be promoted. According to Klauser, the consistent environmentally oriented path along the Danube in the national park area was possible primarily through the cooperation and support of viadonau, municipalities, interest groups, nature conservation organizations, politics and science. Finally, WWF Austria Managing Director Andrea Johanides also emphasized the nationwide exemplary effect of the project: "The reconnection of the Spittelauer side arm with the Danube after more than 100 years is an enormously important signal. Only about one percent of rivers still have intact floodplains. This makes every single kilometer of floodplain that is preserved or newly created more important."