Sometimes isolation can be a bliss, especially when it means turning a vegetated gravel bank into an island, as it was done at the Austrian – Slovakian border close to Wolfsthal. 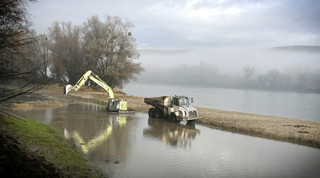 Removal of the existing structures for regulating low water and enforcing a trench between the gravel bank and the river bank of the Danube, Photo: © viadonau/Zinner

During the reconstruction of the existing structures for regulating low water, the trench between the gravel bank and the river bank of the Danube was deepened on a length of one kilometer.

The island character of the structure was significantly amplified due to this and since then the Danube flows through the trench during mean flows and turns it into a valuable habitat for fish which offers them protection against the waves.

The island itself is covered by vegetation typically for the alluvial forests and offers the animals of the Danube floodplains a place to retreat.

For the deputy governor of Lower Austria, Dr. Stephan Pernkopf (ÖVP), who is also responsible for ecology, the island Wolfsthal is an important contribution to the river restoration in Lower Austria. “I am delighted to see, that another section of the Danube could be renaturated with this project.”

The mayor of Wolfstahl Gerhard Schödinger (ÖVP) is also happy about the successful completion of the project. “Our river bank at the Danube was silting up heavily during the last decades. The revitalization measures do not only lead to an ecological enhancement, but also create a more attractive riparian zone and benefit the fishery territory.

Director of the Donau Auen National Park Edith Klauser emphasizes the interconnection of protection areas along the Danube: “Even though the island Wolfsthal lies outside of the National Park, it means a lot to us. Connecting our protected area with the surrounding area is an important stepping stone for nature. This was also the reason to integrate this project into our DANUBEparksCONNECTED project to make its realization possible.”

Hans-Peter Hasenbichler, general manager of viadonau, the company responsible for the construction implementation: “With the island Wolfsthal another element of our Catalogue of Measures for the Danube to the East of Vienna was implemented. We are working on creating optimal conditions for shipping and ecology at this section of the Danube.

The project was realized in cooperation with the Nationalpark Donau-Auen and the preparations were co-financed by the DANUBEparksCONNECTED project.