FAIRway Danube actively supports waterway management authorities in 6 countries along the Danube in improving waterway management activities on their particular section. On 28 November 2017 the project partners reported on the progress made under the lead of the Austrian Ministry of Transport, Innovation and Technology and viadonau. Maja Bakran Marcich, Deputy Director-General for Mobility and Transport of the European Commission, as well as representations of the logistics industry were pleased with the intermediate results of FAIRway Danube. 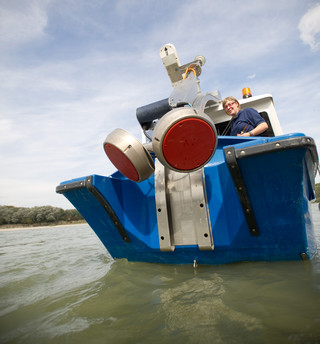 Between 2015 and 2020 FAIRway Danube provides current and harmonized information about shallow sections, water levels and water level forecasts. Available depths will be used optimally by adapting the location of the fairway to the highest possible water depths and the most suitable nautical conditions. In parallel, FAIRway Danube aims at preparing the harmonized rehabilitation of the Danube and its navigable tributaries. Pilot operations of new harmonised services for waterway users and the contribution to technical specifications or operational concepts for the equipment are integral parts of FAIRway Danube.

Until December 2017, significant progress was made:

In 2018, the project will not only focus on finalizing the construction of the vessels and installation of the gauging stations, but also on providing the current and harmonized information about shallow sections. This way, FAIRway Danube will provide a valuable contribution to the realisation of the Fairway Rehabilitation and Maintenance Master Plan for the Danube and its navigable tributaries.