Danube .... what a soundly name

Because today is the Day of the Black Sea, it’s also the day when our Romanian colleagues and friends from AFDJ - Administratia Fluviala a Dunarii de Jos R.A. Galati (Lower Danube River Administration) tell us about their Danube. 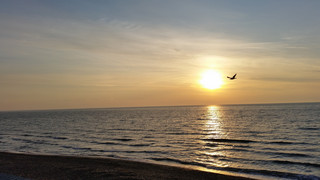 The Danube should be seen as a priority because it is "an international river corridor", flowing from West to East, crossing Europe and its borders and being part of the European network of inland waterways linking people, ports, cities, industrial sites and historical locations. Flowing through four European capitals, the Danube provides clear opportunities for economic and tourism development.

Through its waterborne link between the Black Sea and Central Europe, the Danube is also a multimodal network that connects freight transport among regions in Europe. Thanks to the Danube and its tributaries, inland waterways are the backbone of the European multimodal network in South-East Europe. Sufficient evidence indicates that in terms of transport by inland waterways the Danube is one of the safest, most efficient and environmentally friendly alternative modes of transportation to and from Central and South-East Europe. The Danube is probably the most cost-efficient transport route for cargo transport bound for Central and South-East Europe, with a large transport capacity which allows transports most commodity groups. Advanced information and communication technologies (e.g. River Information Services or RIS) on the Danube, developed by all Danube countries are providing a solid smart infrastructure and making this river a huge asset for the optimization of inland waterway transport in the region.

Over the years, the completion of several European transnational projects has harmonized the waterway management in the Danube region and enhanced services provided by waterway administrations and authorities for the users of the waterway: from water levels, to information on critical sections, electronic navigation charts, traffic conditions and traffic data, or lock management to the implementation of RIS on the entire Danube corridor.
These encouraging results will make us continue working jointly for the preservation of the natural habitat of the Danube and for the improvement of the infrastructure of this absolutely indispensable waterway.

The Author:
Claudiu Egmont Dutu is Head of ENC (Electronic Navigational Chart) and Hydrotechnical Department. Since 2002 with AFDJ Galati, Claudiu is specialized in ENC production, hydrological and hydrographical survey. Since 2005, he has been working on national and transnational European Projects as well as international cooperation initiatives.
E-Mail: claudiu.dutu[at]afdj.ro