The 2015 edition of the 'Strategic Maritime Asset Research and Transformation Rivers Conference for 21st Century Rivers Systems', in short SMART Rivers Conference, will take place from 7 to 11 September 2015 in Buenos Aires (Argentina) for the first time in South-America. 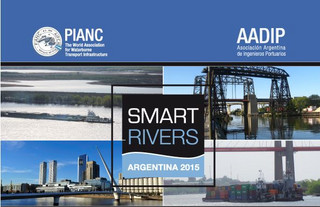 Abstracts must be submitted until 31 January 2015. Passed this date, abstracts will no longer be accepted.

Key actors and professionals in the field of IWT as well as leaders in technical aspects of inland waterway transport, who work in relation with PIANC, have already sent their abstracts. Don't miss this golden opportunity and submit yours now online at: www.pianc.org.ar/sr2015_form.php. Authors will be notified by 31 March and Conference Papers should be submitted until 15 July 2015.

A list of Conference topics as well as additional information can be found here.

High Level representatives of IWT Authorities from the United States, France, Austria, Belgium and the Netherlands, will attend the Conference. Eng. Jorge Quijano, CEO of the Panama Canal Authority, has confirmed his participation in the event as Keynote Speaker.

The 2015 edition is the second conference to be held under the PIANC banner - the World Association for Waterborne Transport Infrastructure. The Conference is organized by, the PIANC National Section of Argentina (AADIP - Argentine Association of Port Engineers), with the support of local authorities, as well as the international PIANC community.